As Umunachi, Obowo APC Leaders and the Leadership of FEDOS storm the IMO State House of Assembly.

The entire Leaders of the All Progressive Alliance, Umunachi Ward stormed the IMO State House of Assembly today in their full weight to reaffirm support for their son, Hon Barr Kennedy Ibeh who was established to have affected the lives of Umunachi people and the entire LGA at large. 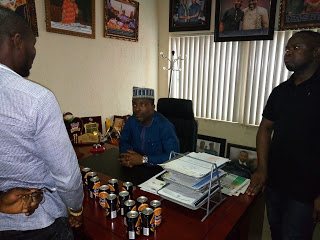 They recounted the numerous benefits they have derived from the effective and efficient representation of their son whose strides equals none.
In his words, the Ward Party Chairman riled out the avalanche of unprecedented landmark achievements of Nke-Nke Enyi Obowo which Umunachi remains a huge beneficiary in various respects. He had on behalf of Ndi Umunachi assured the astute Lawmaker of their unflinching support at all times for the common good of Ndi Obowo.
Chief Uba who had returned home on account of the visit and further thanked and  reassured Hon Barr Kennedy Ibeh of their support for him and Deacon Chike Okafor, noting that it was rather equitable to support Nke-Nke Enyi Obowo to complete the full tenure of Obowo Central as has been politically customary, and on the plank that Kennedy Ibeh had performed creditably well like no other.

In the same vein, the leadership of the Federation of Obowo Students representing IMSU, FUTO, ABSU, Alvan, FEDPONEK, and the IMO Poly besieged the Legislative Maverick in what they described as an *ENDORSEMENT VISITATION* for the Obowo Born Legislative enigma. They noted that their visit was informed by the various projects and scholarship scheme of the Honorable Member and remarked that it would be wicked and insensitive of them not to identify with him and also congratulate him on their plethora of life changing endeavors. They applauded him for reaching out to the youths within this shortest period of engagement and unanimously beckoned on him to declare interest for the State Assembly so as to move Obowo to a greater height.
On his part, Hon Barr Kennedy Ibeh thanked them for considering it worthycoming to the House of Assembly to see how their own son is doing. Worthy of mention was the reassurance he gave the people that the office doesn\’t belong to him but to the entire Obowo and as result, remains open to welcome the people of Obowo at anytime. He urged them to feel free to reach him with the immediate concerns of the Obowo people as it is his duty to voice them to the State through the House of Assembly. He further enjoined them not to relent in their support for Hon Deacon Chike Okafor who has done in 5 years, what no one could do for Ndi Obowo in the political past. He said it would be an invitation of nemesis for one to work against the progress of Obowo by merely fighting their own. Prominent in his remarks was urging them all not to fight or nurture grudges, breed animosity, avarice, and malice with any Obowian as it\’s inconsistent without their  commitment to remain a more United and progressive Obowo.