Some notable political leaders in the country have praised the rich cultural heritage in Imo State, insisting that one cannot be divorced from the culture and tradition of his land.

The governor of Sokoto state, Rt Hon Aminu Tambuwal, has said the Iri Ji Mbaise (New Yam Festival of Mbaise nation) is a culture, if harnessed of its riches, will make Imo State a tourist destination within and outside the country.

Tambuwal, a special guest of honour at the 2019 Iri Mbaise Festival held today, 15th August, 2019, , urged the people of Imo State to support Gov. Ihedioha. Tambuwal, who is a former speaker of the National Assembly, described Gov Ihedioha as a man who is result oriented and dedicated to restoring all that the state lost in the past. 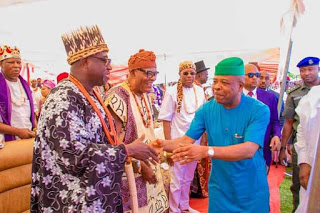 Meanwhile governor Ugwuanyi of Enugu state has described Mbaise nation as a peace loving and hospitable people who have been consistent in sustaining the age long Iri Ji tradition.

This was contained in his address at the Iri Ji Mbaise festival held at Mbaise Secondary School Field. The governor noted that Mbaise nation had shown great desire in hoisting the cultural flag of the Igbo tribe with regularity and passion.

In his  own address, the governor of Imo State, Rt Hon Emeka Ihedioha, described the Iri Ji event as one that must be sustained, not only in Mbaise nation but other parts of the state. He noted that the wide acceptability and intimidating audience the festival witnessed could be leveraged on for socio-economic gains for the state.

Gov Ihedioha revealed that the festival triggers bountiful harvest for farmers and general prosperity for the people. Gov Ihedioha noted that the celebration often serves as a bond for the Mbaise nation.

The event also had the presence of the State Chairman of Imo PDP, Chief Barr. Charles Ezekwem, Honorable Commissioners in the State, top Government officials and host of other prominent Nigerians.