On behalf of the good people of Imo State, I am sincerely delighted to address you on the occasion of the 4th Edition of the Engr. Emmanuel Iwuanyanwu Annual Lecture Series, organized by the Nigerian Society of Engineers, (NSE) Owerri, Branch. The theme for this edition which centers on “Re-awakening and imbibing the culture of manufacturing enterprise: Needful drivers for industrial development in Nigeria” is very apt for such a time as this.

2. Indeed the great man after whom this lecture series was named is certainly one of the most revered of Nigeria’s elder statesmen. We are proud that he is a great son of Imo State. On the national stage, he remains a huge stabilizing influence. In Imo State, he is a father figure and a peerless mentor. His influence has spanned many fields such as sports, media and philanthropy. In the engineering profession he is a trail blazer. 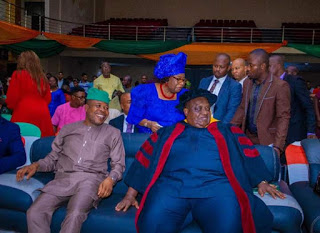 3. Chief Emmanuel Iwuanyanwu, rose so fast in his engineering career after he took up employment with the Hardel and Enic Construction Company. He demonstrated great audacity when he later acquired it from its foreign management. By this act, Chief Iwuanyanwu pioneered one of the earliest indigenous engineering companies in Nigeria. Within a short period Hardel and Enic changed the face of engineering practice and showed the world that “can-do-spirit” with which the Imo people are known.

4. On behalf of the good people of Imo State, may I therefore, express our deepest appreciation to the Nigerian Society of Engineers, Owerri Branch, for naming this prestigious Lecture Series, after Chief Emmanuel Iwuanyanwu. This is altogether not surprising as the NSE Owerri Chapter has always demonstrated a high sense of patriotism and great interest in the affairs of the State, especially in the area of its physical development.

5. One major testament to your commitment was the alarm you raised over the structural defects on major flyovers built by the past administration on critical ring roads in Amakohia and Ugwu Oji. Without your early intervention, paid hatchet men would have ascribed any observations raised by this government as a mere witch hunt. By speaking out promptly, you averted major disasters and the deaths and losses that would have come on its trail. We are currently studying your report in order to know how to salvage the situation in view of the huge financial investments already involved. We also insist on integrity tests on any physical development we are embarking on.

6. This said, I would now address the subject of my invitation: My Views on Industrialization of Imo State.

7. Permit me to begin by recalling a recent event in Imo State during which we hosted the South East engagement of the Presidential Enabling   Business Environment Council (PEBEC) on Ease of Doing Business. The Council had showcased three young start-up entrepreneurs.  Two young men from Abia and Anambra States respectively and a young lady from Imo State. The lady had graduated from Imo State University in Accounting and veered into cake business. Not long after, her cake business had grown beyond the shores of Nigeria.

8. The young boy from Abia State, graduated in biochemistry from the Federal University of Technology, Owerri. Upon his completion of NYSC, he had lost his father. Necessity, they say, is the mother of invention. He chose to harness his father’s oil palm plantation, set up an oil mill cottage industry and began processing and bottling pure unadulterated palm oil. His business is on the upward swing today. He says one of his greatest joy is having to create jobs for other younger folks.

9. The third, was the young man from Anambra State. His was no less phenomenal. A project he started like a child’s play, in his undergraduate engineering years at the Federal University of Technology, Owerri, today has become a global brand in the renewable energy subsector. Currently, his company has become a market leader in Distributed Renewable Energy in Sub-Saharan Africa. He has over 27 subsidiaries in eight African countries and still counting.

10. One thing these young fellows had in common, was that they were all graduates of universities in Imo State. They were also imbued with the Emmanuel Iwuanyanwu spirit and audacity: bold, daring and innovative. If you ask me, this kind of young lads represent the focus of our industrialization policy. We are working to create many more Iwuanyanwus in Imo State: indeed, young men and women with courage, innovative spirit, hardworking and entrepreneurial.

11. Imo State, as we all know turns out the highest number of graduates and school leavers in the country, every year. Subsequently, in an era when it has become very impossible for government to be the main recruiter for job seekers, the thrusts of our policies are to build the capacity of our youths, provide them with necessary infrastructure and create the enabling environment for them to start their own business and thrive.

12. In this direction, we have set up an Ease of Doing Business desk in the Governor’s office to assist both interested foreign investors and local start-up entrepreneurs. We have revived the moribund Imo State Investment Promotion Agency (ISIPA) with the aim of showcasing the various investments opportunities and the numerous mineral resources in the State. This is with a view to positioning Imo State for Foreign Direct Investment. In addition, with ISIPA, we are primed to harness our strategic location to become the business and tourist hub of the South East and South-South.

13. As we are all aware, without agriculture and mineral resources, there can be no meaningful raw material base for effective industrialization. As a result, we are massively investing in oil palm plantations. We are looking at planting N1million seedlings every year for the next three years. Land for such have been donated by communities. We have also trained 500 Imo Youths under our Youths in Agriculture programme. Upon return, we are working to advance them start-up capitals to begin their own agricultural businesses. We have as well-designed strategies to partner with interested foreign and domestic investors to harness the value chain of these and our other industrial potentials.

15. I was excited by handiworks of three pupils who had exhibited models of SUV cars, a aircraft and a house during the event. I had to demonstrate my appreciation of their creativity and awarded the three pupils scholarships up to university level in Nigeria.

16. As we all know, infrastructure is a major enabler in industrialization and manufacturing. To this effect, we paid our counterpart fund amounting to N500 million to the World Bank in order to attract N13.5 billion funding for the construction of a total of 380.7 kilometers of road in the 27 LGAs in the state. The jobs have already been awarded and works have commenced in earnest. In the new year, we are ready to contribute our parts to secure access to capital for industrialization and various purposes, under partnership arrangements with the Central Bank of Nigeria, Bank of Industry and the Bank of Agriculture among others.

17. Works have commenced on 14 critical roads across the State Capital and in addition, recently, we awarded contracts for the rehabilitation and reconstruction of various Federal Roads which are very pivotal to the economic life of the state. They include: the Owerri-Orlu Road, Owerri-Obowo Road, and the Owerri-Okigwe Road. We have also embarked on numerous projects for the rehabilitation and development of public utilities such as electricity and water supply among others.

18. We have designed a PPP comprehensive strategy to partner with interested investors under various models which include: Equity Participation, Build Operate and Transfer (BOT) and Build Operate, Own and Transfer (BOOT) models.  In this direction, a law is being enacted to make the Imo investment environment more responsive to businesses.  This also includes an Infrastructure Regulatory Agency to protect investors in this sector.

19. Currently, we are working with a global consulting firm – the CSPS Transcom to put together an integrated investment plan designed to transform the State into one of the top three most developed state economies in Nigeria by 2025.
20. Our efforts are already yielding results. We are delighted to note that The AfrExim Bank, is currently working to establish its Investment Centre for the South East and South-South Zones in Owerri. The regional financial institution is set to invest $50 million (N18 Billion) in Imo State in its proposed Quality Assurance Facility. Upon completion, it would provide certification and inspection services for various export products from the catchment area. It would also provide capacity building to industrialists, generate employments and bolster economic activities in the regions.  We have also approved the commencement of audit of a technological audit with a view of Public-Private-Partnership for broadband internet infrastructure.

21. Imo State also boasts of a high inflow of diaspora remittances. Consequently, we have set up an Office on Diaspora Matters under the Governor’s Office. As you may wish to know, South East immigrants contribute over 50 percent of the estimated $25bn Diaspora remittances nationally.  Of this amount it is estimate that Imo State constitutes over 40 percent of this number with its nearly 1.2 million Diaspora population. Many are already reaching out to the Governor’s Office on Diaspora Matters with investment proposals in response to our “Rebuild Imo” Agenda.

22. On this note, I have to reiterate that Imo State is open for business. I therefore solicit your partnership, support and sacrifices in our Rebuild Imo Agenda. I would like to urge you to continue with your constructive engagement in the affairs of the state and above all, to emulate the good example of Chief Emmanuel Iwuanyanwu to invest in Imo State.

23. I thank you all for you revered attention and wish you a very refreshing session.