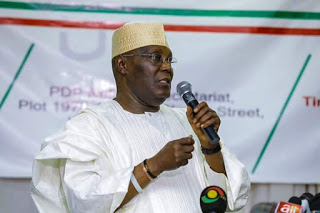 Reacting to the killing of stranded travellers in Maiduguri yesterday by the Boko Haram terrorists, the  Presidential candidate of the Peoples Democratic Party (PDP), noted that the attack which took place in Auno was one too many.

Atiku said Nigeria can’t afford to stay divided in the face of its common enemy.

He also sympathized with the bereaved families, noting that the incidents should make the nation explore all possible options to put a stop to the carnage.

Atiku made these remarks on Sunday via his verified Twitter handle.

Meanwhile, President Muhammadu Buhari has promised to continually frustrate the goal of terrorists to hold Nigeria to ransom, insisting that their days are numbered.

President Buhari in a statement by his Senior Special Assistant on Media and Publicity, Garba Shehu, on Monday, condemned the “murderous and cowardly attack on innocent passengers by the Boko Haram terrorists near Maiduguri.”

The insurgents attacked stranded passengers on Sunday night at Auno, a village near Maiduguri, the Borno state capital, killing 10 people and burnt no fewer than 18 cars, including heavy-duty trucks.