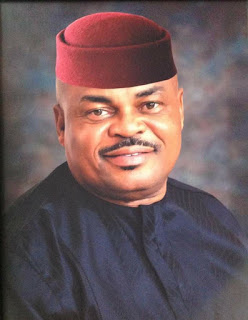 His early academic career started in Umuahia, Abia State where he had his primary education. His secondary education was at Community Secondary School, Ikenazizi Obowo, and later transferred to Ibeku High School in Umuahia where he graduated as one of the best students.

He worked briefly as a Clerical staff at then Imo State College of Agriculture Umuagwo (Imo State Polytechnic Umuagwo). He later gained admission into the school and graduated in 1986 with distinction in Higher National Diploma (HND).

Way back as a student, Ikeoha displayed his interest in students unionism by contesting and getting elected as Commissioner for Welfare. Because of his outstanding performance and strong political will, he was drafted into the SUG presidential race of the institution where he emerged as the only qualified presidential candidate before the IBB Government suspended Student Union Government (SUG) activities in 1985.

On completion of his one year National Youth Service Corps (NYSC) programme in Ogun State in I987, he was recruited into the Nigeria
Customs Service as an Assistant Superintendent of Customs where he headed some key units as;

Chief Emmanuel Okewulonu voluntarily retired from service in 1999 to pursue his lifelong dream of a career in private business.
He established JOK Investment Nigeria Limited and ASPORI-IZA Nigeria Limited with core interests in Shipping, Import and Export of goods with offices in South Korea, Japan, China, Switzerland, Holland etc.  Chief Emmanuel Okewulonu has established himself as one of the largest operators in the freight forwarding industry.

A great footballer in his youthful days when people began calling him \’Surpriser\’, Ikeoha, as a lover of soccer, has been sponsoring numerous youth football competitions across Imo state and Okigwe senatorial zone for years now.

Ikeoha is an outstanding philanthropist who believes strongly in human capital  development. He derives so much joy in touching lives in the following areas;

Chief Emmanuel Enyeribe Okewulonu is a socialite, He is a member of Nigeria shippers Council, ABA Chamber of Commerce, Industry, Mines and Agriculture (ACCIMA) etc. He has received so many  Awards  over the years.

He is happily married to his amiable wife Lolo Udochi Obianuju Okewulonu and blessed with five children.