Governor Hope Uzodimma has signed into law the 2021 appropriation bill into law at the government house Owerri.

The bill which was presented to the state house of Assembly by the Governor as the 2021 budget last week has undergone the legislative processes and ready for his assent.

Presenting the bill to the Governor for his assent The Speaker Rt Hon. Paul Emeziem alongside his deputy, the majority leader and another house of assembly members assured the Governor of doing thorough work and restated the integrity of the house in ensuring that the budget was not padded and devoid of irregularities. 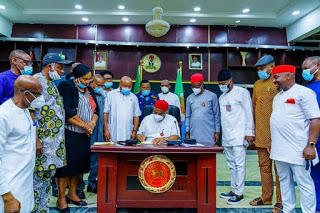 Gov. Hope Uzodimma appreciated the house for taking their time to address every critical issue raised in the budget and promised that very soon the budget will become more visible in every sector of the state. He added that his administration will not condone any act of financial recklessness and impropriety by any government official or agency and that anyone or office that is found wanting must answer for it.

He further encouraged the smooth relationship between the Executive and the legislature in the state and described it as a panacea for development in the state.

Gov. Hope Uzodimma last week presented the 2021 budget titled: Budget of Wealth Creation totalling N346,169,972,082. It is expected that by the signing into law of the 2021 appropriation bill things will begin to change for good in the state.