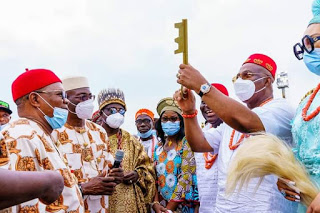 Today, the entire Owerri Zone stood still in honour of His Excellency Gov. Hope Uzodimma in appreciation of the shared prosperity government and the 3R mantra initiative of rehabilitation,reconstruction and recovery visible in Owerri Zone and the entire Imo State. 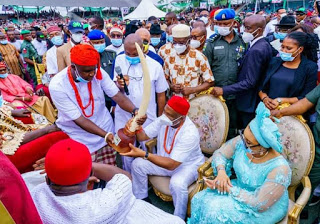 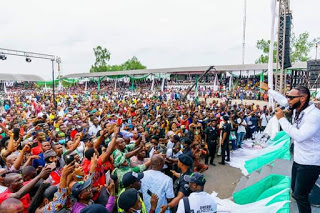 The event which witnessed a mammoth crowd and dignitaries from the Zone at the Heroes square which includes the traditional rulers, Senators, House of Representatives members, House of Assembly members, stakeholders and all Owerri Zone sons and daughters saw to the chieftaincy title conferment on Gov. Hope Uzodimma as the Onwa n’etiri ora 1 of Owerri Zone and his wife, Barr. Mrs. Chioma Uzodimma as the Akaraugo.

In his reaction, Gov. Hope Uzodimma with a heart full of gratitude and appreciation commended the people of Owerri Zone for such a warm reception and honour.

The Governor stated that the honour bestowed on him is a challenge to continue the good works in Owerri zone and in the state at large.

He assured the people of his resolve to continue doing his best and sustain the momentum as well as implement policies that will better the zone and the entire state. He besieged the Owerri zone to trust him as things will definitely change for good.

“Sincerely speaking, Imo State needs help and no one can do it alone and am here to render help to get our state to the desired destination” Uzodimma added.

The Governor further enjoined imo sons and daughters to cooperate and join hands in partnership with the state government to make Imo a model state that will be the envy of all in the country and reinstated his plans to fix the roads, schools, build hospitals and bring about shared prosperity to imo people by making life more comfortable. He pleaded with them not to believe cheap propagandas but judge him by the complete turnaround and development that will come to imo state in no distant time as Imo State will be made worthwhile again.

This occasion has put to rest several side talks about the acceptance of the governor by the Owerri Zone people as it shows that Gov. Hope Uzodimma enjoys the support and mandate of the zone as the tide changes.