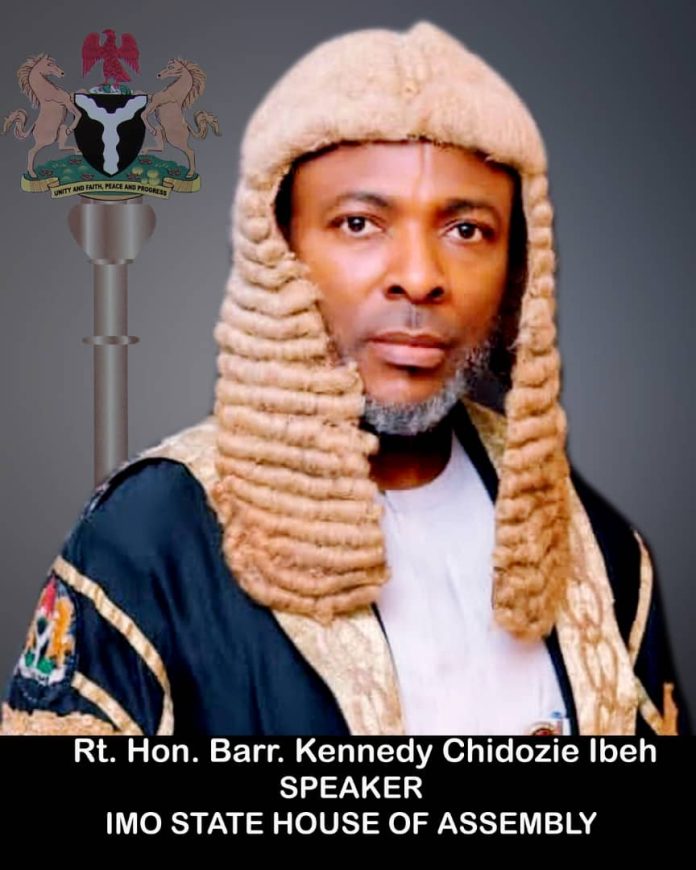 It is not in my character to dissipate effort and precious time in responding to concocted verbiage, vituperation or inventives by unrepentant pen brigands whose only aim is to bring down any government they are not part of.

My attention was however attracted to the diatribe on social media, written by my good friend, Collins Opurozor titled: Slave to Vanity, Prisoner to Lust: A True Story of Kennedy Ibeh”.
My first instinct was to ignore the garbbage and allow the writer to continue quarelling with himself as he has always done even before this administration came on board.

But on closer look at the strings of words that formed his piece, it was clearly evident that part of Opurozor’s brief by his pay masters was to smear the unassailable reputation of the Speaker, IMHA,, Rt. Hon. Barr Kennedy Chidozie Ibeh, member representing Obowo State Constituency.

Probably because he has no Idea of the giant strides of the Obowo born lawmaker or he closed his eyes to them, that he set out to do the job by deploying inventives, cheap blackmail and blatant lies told in flowery language that signified nothing.

He operated from the despicable height of crass ignorance to justify his payment by the Peoples Democratic Party (PDP), Imo State, which just approved his permanent engagement as their New Media Director.

This short intervention wouldn’t have been necessary except to strengtened the record which Mr. Collins Opurozor struggled hard to truncate, also to educatte him on the uncommon transformation achievements of Rt. Hon. Barr Kennedy Ibeh both as Mr. Speaker IMHA, and before he was unanimously elected as the first among equall by his colleagues in the House.

The first thing that caught ones attention on the drab material is that the title of the piece unveiled the false toga and the intent of the writer. it l revealed His true essence which is total falsehood and blackmail.
He titled the crab, “Slave to Vanity, Prisoner to Lust: True Story of Kennedy Ibeh”.
The questions that agitated right thinking minds are how can Opurozor who is from Ideato North, who has no known history or relationship with Obowo, tell ‘the true story of Kennedy Ibeh?’ agrassroots politician, who rose to the exalted position he occupies today through the ranks? How does he think that such meaningless play on words which has become his strategy in pulling people down, will smother the truth and hoodwink the descerning public?

What he did not know is that truth dispels falsehood in the manner that light dissolves darkness. There is a limit to which lies can go. It is therefore a mockery of himself when he said in his piece that “..in Obowo there is hardly anything positive to talk about Ibe’s representation for almost eight years , no single project attracted..”

The constraints of space and time will not allow me to debunk this black lies (or is it white lies), with loads of evidence, but suffice to say that as we speak, the Rt. Hon. Speaker, is rebuilding Afor Umuokeh market single handedly. Collins can just go on fact finding.

Rt. Hon. Kennedy Ibeh in his empathetic disposition, constructed and fully furnished 2 bedroom bungalow for a widow with 5 children, at Mgbóma Alike Obowo.
He rehabilitated Umuikpelewe Ndiuhu Amuzi pipe-bore-hole water scheme and build an ultra modern lavatory at Ekeja Ehume Obowo. The people of Umuebubem Ndiuhu Amuzi, meets in a Civic hall constructed by Rt. Hon. Kennedy Chidozie Ibeh. Those he influenced their employment in various private, public and government establishments are nemerous.
It is a very long list that cannot be exhausted in this single article.
These are variable facts as names of locations are attached.

It is not for nothing that the name of Rt Hon Kennedy Ibeh and Senator Hope Uzodinma resonates every where you go in Obowo. The people believe in what they see.

Within the last 5 Months that he has been speaker, his benevolence cuts across the states. He has appointed more than 100 people from various parts of Imo to various positions in the office of the Speaker. The multi million naira dilapitated Assembly Complex and the Speaker”s Lodge have been rebuild to state-of the-ark edifice, courtesy of Mr Speaker’s relationship management with the executive who graciously granted the project.

I wish to remind Opurozor and all those who choose not to see any good in a good man, that Dec, last year, Rt. Hon. Barr. Kennedy Ibeh, donated his salary 100 percent to youths in Okigwe zone, an uncommon benevolence by a man with a golden heart.

The House core mandate, which is appropriation, oversight and legislation have been invigorated with a boost. Government agencies, departments and all other organisations doing business in Imo are now on hot seat.

IMHA, through House Committees have demonstrated that it is no longer business as usual as theiy beam their search light on them through the use of oversight instrument.

The 2022 Appropriation Bill, a crucial and all important document for Imo people, was passed in a speedy record time never known in the history of IMHA. There is no doubt, the House is in good hands and on progressive stride to the betterment of Imo people.

Let me quickly add that the claim by Opurozor in his ill intended gibberish that…”In Imo under Ibeh, the parliament has ceased from acting as watchdog against the excesses and malefeasance of the executive…”, is nothing but bunkum, Such assumption is the manifestation of terrorist mentality, the believe that nothing good can happen without the use of strife, struggle, brute force and intimidation,

The truth is that since Rt. Hon. Barr Kennedy Chidozie Ibeh, (Nke-nkeyi Obowo), took over the leadership of Imo State legislature, dignity, panache and respect has returned to IMHA. It has regained its pride as the basion of democracy.

Contrary to the expectation of Opurozor and his ilks, the House has developed independent but cordial working relationship with the executive, which has created the enabling environment and peace of mind for His Excellency, the Governor of Imo State, Sen. Hope Uzodimma, to perform.
No wonder Imo has become a construction site of sort
Collins Opurozor is from Ideato North, but lives in Owerri. He goes to his village through Owerri-Orlu road, why did he close his eyes to the quality road construction through which he goes to his Village?

How come he didn’t realize that only a government with peace of mind and promt appropriation by the legislature can achieve that much?

Let me assure Collins that the strife and acrimony between the executive and legislature, which people like him always pray for, to stultify our development as a state, will not happen under the leadership of Rt. Hon. Barr Kennedy Chidozie Ibeh. Imo must move forward!
As, a speaker, he instilled discipline, positive attitude to work for both the executive and legislative staff.
Punctuality has become the soul of legislative activities, members are regular and on time to work. Relaxing the House Rule to enable the House seat beyond 1 pm, which happens as a result of starting plenary late is no longer the case.

It is arguable that Imo State House of Assembly legislators are now among the most informed, exposed and knowledgeable House Members in Nigeria on legislative process. This is owing to high powered training and retraining program initiated by IMHA leadership under Rt. Hon. Barr Kennedy Chidozie Ibeh.

The House Rules known as the bible of the legislators has become companion of Imo lawmakers who quote the document copiously for direction and guidiance during plenary.

The other points he raised about suspension of lawmakers and declaration of seats vacant have been sufficiently dealt with, but Collins deliberately refused to see the fact, rather he opted to join the bandwagon to get cheap approval of the innocent Imo people.

In his desperate effort to run Rt. Hon. Kennedy down, Collins wrote: “. The queen of all maladies is not just that the House now suspends its members for attending burials ceremonies , it also declare seat of members vacant for defecting to other political parties-Obinna Okwara of Nkwerre is the latest victim”.

Let is be recalled that Collins Opurozor was among the people used to demonized Mr Speaker and IMHA recently when Rt. Hon. Barr Arthur Egwim, member representing the good people of Ideato North, who was one of the suspended members, arrived from overseas to Abuja, fell ill and was taken to hospital outside Abuja.

Without finding fact, Collins went to town to exhibit his second nature which is lies. He raised false alarm to high heavens that the Rt. Hon.member was kidnapped due to his suspension by the leadership of IMHA, what a mischief!

It is this same lawmaker that Collins once claimed was suspended because he attended burial ceremony. But today, Rt. Hon. Arthur Egwim, one of the leading light of IMHA and his colleague, Rt. Hon. Ngozi Obiefule, another pillar of the Assembly, who erred and were appropriately sanctioned, have realized their errors, apologised to the House and have rejoined their colleagues lawmakers in the hallow chamber of IMHA.

On the declaration of the seat of the recalcitrant lawmaker fron Nkwerre vacant, the points have been made that Mr Speaker is sufficiently empowered by section 109 and the relevant subsections of 1999 Constitution of the Federal Republic as amended, and the Assembly House Rule to declare seat of members who flagrantly flout the constitution vacant.

Having presented the matter properly before the House with cogent and verifiable evidence, in line with House Rule, the Speaker became legally bounded to comply. In the case of Obinna Okwara, there were quantum evidences that he openly defected to another party contrary to the constitutional provison. The law has to take its full course.

The issues about Mr. Speaker himself having defected many times from one party to the other need not be responded to, until those who bandit such tell us who among the honourable members of the 8th House brought the case up and which speaker sat at that plenary.

The PDP House member, Hon. Tochi Okereke of Ngor-Okpala State Constituency, whose seat was declared vacant absconded from his duty post for a period beyond the time frame legally allowed.

Records showed that he attended plenary 29 times in 2019. In 2020, he was at the sitting 14 times only. In 2021, he did not show up at all. Based on the petition brought against him by his own people, followed by a properly moved motion and subsequent approval from the honourable members, his seat was declared vacant.

Ngor-Okpala State Consistency now has a vibrant and loud voice in the person of Hon. Blyden Amajirionwu.
All these points have been made consistently by even NGOs such as Imo Network for Peace and Good Governance (INPGG) to educate people like Collins Opurozor.

One of the press releases by INPGG published in social media and newspaper to address this matter was titled: ” Those who attack the Speaker , IMHA, Hon. Kennedy Ibeh, on the account of the declaration of Nkwerre State Constituency seat vacant need their brains examined”

Let me conclude by advising my good friend Mr Collins Opurozor to shun writing like a press agent of ancient Europe. The press agent of that time believed that the public is gullible. They play upon the innocence of the public by using exaggeration, distortion, deception to attract public attention . They are known for violent and provocative act primarily through media publicity. World Analysts described such practice as modern terrorism.