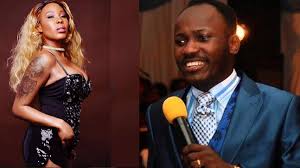 Apostle Suleman opens up on new allegations by Stephanie Otobo

Apostle Johnson Suleman, General Overseer of Omega Fire Ministries, has vowed not to allow allegations made against him by his alleged lover, Miss Stephanie Otobo, go unchallenged.

Apostle Suleman, who spoke to The Sun through his Media Adviser, Phrank Shaibu, dared Otobo to prove all her allegations in court.

“Can’t you see the contradiction in the claim of being poisoned by Apostle? First, she claimed that the poison was given to her by Apostle in a hotel. Next she said it was in a dream. Perhaps, she would come up with another bizarre tale. Seriously, even my three -year- old daughter can do better”.

On Otobo’s claims that if Apostle Suleman presents his international passport, it will reveal that both of them travelled together on a certain day to Canada, Shuaib responded: “How do you travel with someone you have never met? It is clearly an illusion and part of her romantic fantasy.

“But again, if she wants to prove her case before the media, are we the ones to help her do so? Can’t she go to the airline and get a manifest on how they travelled together? Tell the world her seat number and that of Apostle Suleman. Let her get those facts and give to the press.

“Besides, when a stalker is desperate, he/she can go to any length to get his/her victim’s attention. If you know the itinerary of your target, particularly a preacher whose international meetings are made public, a desperate stalker can go there in attempt to see the person. The truth is that, this is an unnecessary media trial and it is deceitful, mendaciously knavish and full of falsehood.”

On bank statement showing payments Apostle Suleman allegedly made into her (Stephanie’s) account, Suleman’s aide said “Anyone can type and print a statement and call it by any name. But it cannot be called a genuine bank statement, except such a statement has been so verified by a forensic expert under the direction of a court of competent jurisdiction to so do.

“More so, what we had expected was evidence to buttress her initial claims of tons of dollars, Euros and the Pound Sterling being paid into her account, not the lodgment in a Naira account. Certainly, this is an afterthought, but it is not strange as Apostle Suleman engages in a lot of charity. On a daily basis, men and women come for help and he assists them.

“Was he sleeping with the 30 widows and other indigent people that he gave out millions to start their own businesses? To Johnson Suleman, giving is a lifestyle. The fact is that, we have never denied extending help to this girl.”

Asked if the matter has eroded the confidence of the public and members of the church have in Apostle Suleman, Shuaib maintained that the church has reached a decision on this matter.

“And I don’t think there is any need expanding any debate on this. Her mother has come to beg for forgiveness and we have reached a decision on that. The church also knows that this is a lady that deliberately wants to distract Apostle Suleman from his good works and there is no point giving her attention.

“Till date, she has not brought out any credible evidence that she has been able to hold on to. Everything she has said in the past, she contradicted in her subsequent videos. It’s so unfortunate that she has wasted everybody’s time”.