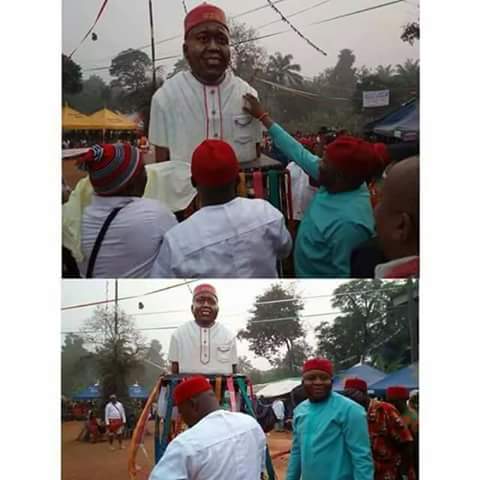 His face was used as add-on for a masqurade and some michevious persons carried fake news that he had erected a statue for himself.

Philip Dike had this to say: \”Now the joke is on, is Rt Hon Ozurigbo Ugonna not worthy of being kpuolad?\”

\”He is to be Immortalized for his good works. Enyioha Gburugburu has affected lives of people positively and he deserves to be kpuolad.\”

\”Take a good look at first picture in this update and clear your doubts. The bust image is but the face of a masquerade!
The honour was done to him by the good people of Amucha, in Njaba LGA, not even his native Nwangele LGA.

That said; to argue that Rt. Hon. Ugonna Ozurigbo is doing well as a legislator is a hackneyed fact.

Let me repeat, for emphasis, that there was no statue anywhere, but just an add-on, to the face of a legendary masquerade.

What is your stake in the whole saga. Drop your comments .