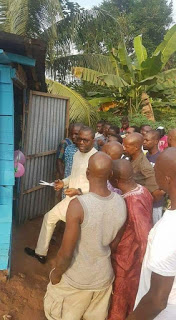 RE: THE  SPONSORSHIP AND COMMISSIONING OF A VIEWING  CENTRE BY HON BARR KENNEDY IBEH FOR AN OBOWO YOUTH:
THE TRUE STORY.

I have read with great trepidation how some mischief makers and relevance-displayed handlers  have taken their time to litter the social media with some cacophonous writeups on how Hon Barr Kennedy Ibeh built and commissioned a Viewing Centre and Bet9ja Office for an Obowo youth.

I sincerely congratulate them for at least using their idleness to attract the attention of the public. Unfortunately, the reading public who are armed with sufficient information on the leadership strides of the Obowo born Lawmaker in the Imo State House of Assembly have also without wasting any second provided rebuttals as against the claims of the mischief makers.

In his usual manner of visiting his constituency and making brief stops at small gatherings of people, Hon Barr Kennedy Ibeh  had in 2017 called home on a regular visit and met a gathering of some young men who are his constituents. He was besieged by a great number of youths  as they would always do. Whereas some made requests for some cash for drinks etc, three boys successfully arrested his attention with their business proposals, one of whom happened to be the owner of the much talked-about Viewing Centre and bet9ja Office, Mr Ikechukwu Ebenezar Okeke, from Umuakama, Umuokeh Obowo.

The young man had his business proposals presented to Hon Barr Kennedy Ibeh who saw merit in the proposal and quickly asked for his budget. The young man responded by saying, “if only I can be given 300,000naira, I would be made for life…”. For Hon Kennedy Ibeh whose mentorship mantra for wealth creation is “FOR YOU TO MAKE MONEY, SERVE PEOPLE AND SOLVE THEIR PROBLEMS “, if 300,000 naira was all that a young man would require to meet his dreams, then let him have it.
Without wasting time, the astute lawmaker immediately dolled out a Cheque of #300,000 to the credit of the young man who ran to the bank the next day and made withdrawals.

In less than 2 weeks, the Beneficiary had Hon Barr Kennedy Ibeh inundated with calls appealing him to come and commission his business. And of course as the Honorable Member, he had the pleasure of identifying in the success story of the young man. This young man has since then gained stability in finance and could afford to send to the Benefactor, a goat and a Turkey as marks of gratitude.

It’s rather a display of ignorance for one to talk down on Viewing Centres and Bet9ja offices which happens to contribute in good measures to the GDP of the Nigerian Economy today. If only they knew. 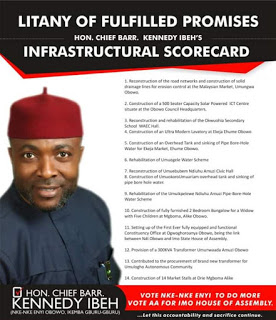 WHAT THEY WONT TELL YOU.

The pictures which serve as annexures to this post are for the consumption of the reading audience. They contain things that the mischief makers would not tell you. They are verifiable facts on ground. 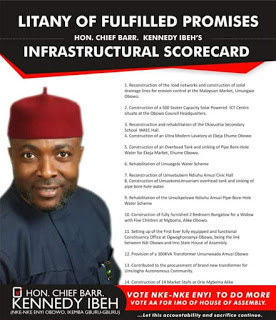 They won’t tell you that Hon Barr Kennedy Ibeh constructed a 500 Seater Solar Powered ICT Centre for the people of Obowo.
They won’t tell you that donated 300KVA Transformers to communities, rehabilitated and reconstructed extremely dilapidated classroom blocks in his constituency, built and donated fully furnished 2 Bedroom Bungalow for widow, Free Jamb Registration for his people, construction of borehole and ultra modern lavatories in markets, construction of Orie Mgboma Alike Market,  construction of Civic Centres for 3 communities, etc. 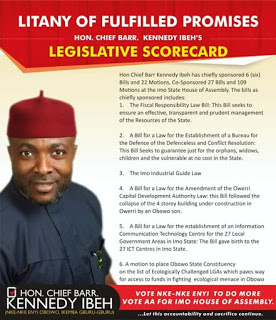 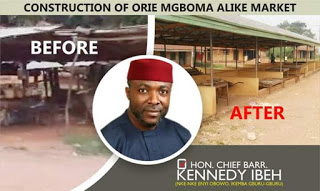