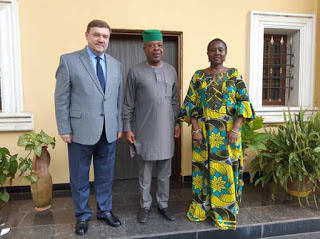 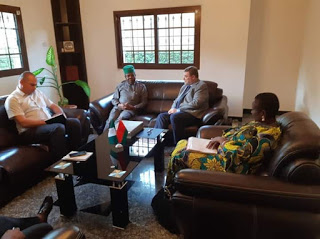 The quest to rebuild Imo recieved a big boost last Thursday, when the Ambassador of Belarus, Mr. Vyacheslav Bril and His Excellency, Rt. Hon Emeka Ihedioha had a meeting in Abuja. During the strategic meeting the duo discussed on how Imo State and the Republic of Belarus can partner in various areas of common interest including but not limited to Education, Agriculture, Health, automobile, youth development, roads and infrastructural development.

During the discussions, Gov Ihedioha informed Mr. Bril that his Rebuild Imo Government has developed a sound blueprint for revamping the economy of the State. Stressing that Imo is blessed with an abundance of both human and natural resources, which makes her a viable tourist and investment destination.

He further explained to the Ambassador that his Administration is passionate about moving the State, formerly known only as the hub of education in the Southeast, to an enviable new level of an economic giant. The Governor informed the the Ambassador,  that Imo will begin with ordering 100 Belarusian trucks to boost Agriculture in the 27 Local Government Areas of the State.  He invited Mr. Bril to visit the State with his delegation in order to see things for themselves.

In his response, the Belarusian  Ambassador thanked the Governor for his prompt reception to the ideas raised. He expressed satisfaction with the deliberations and gave assurance that his Government will partner the Rebuild Imo Government to revolutionize critical sectors of the economy, including technical and tertiary  education, human capital development, healthcare, Agriculture as well as engineering construction in the State. Finally, he promised to send a delegation to visit Imo State soon to assess the situation and confirm the areas of partnership.

The highpoint of the meeting came when during the exchange of diplomatic gifts, the new Imo Education Newsletter was also presented to the Ambassador. Also present at the meeting was the Commissioner for Education, Prof. (Noble Lady) Viola Adaku Onwuliri amongst others.