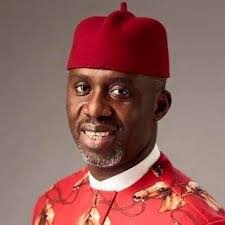 I am not in any political pact with anyone as what matters to me now is supporting the government in power to deliver her mandate to Imolites……Ugwumba Uche Nwosu
…Says that it is unprogressive for anyone to start talking about 2023 when we are just in 2nd Quarter of the year
…calls on Imolites both home and abroad to ensure that Imo, our State is moved to the next level
The rumour making round in political quarters and beyond that Ugwumba Uche Nwosu is in a pact with the last guber candidate of PDP, Hon. Emeka Ihedioha politically with respect to 2023, is totally false and lies from pit of hell.
Ugwumba Uche Nwosu who spoke to the Media at Abuja, the Federal Capital Territory maintained that people should know the differences between pre-election, Election and Post-Election periods. He also noted that after Election, what happens next is governance and in era of Governance, it is not time for politicking, rather a period that the government and the governed should join hands together and move the State forward.
Chief Nwosu also stated that what every right thinking and positive minded Imolite should do is to join hands, resources and ideas towards moving the State forward.
According to him, this is the best patriotic mindset that we all need now and not talking about 2023 which will cause nothing but disunity, distrust and rancour even among party members. This is not what we need now, he added.
Adding his voice, the Media aide to Ugwumba Uche Nwosu, Hon. Nwadike Chikezie has also condemned the source of such unfounded lies aimed to discredit the spotless image of his Principal, Ugwumba Uche Nwosu.
Collaborating with the position of his boss, Hon. Nwadike while responding to Media barrage of Questions especially on Social Media noted that the rumor is still a handiwork of those whose stock in trade is to malign and blackmail successful personalities in order to draw attention and possibly sell their fake news to gullibles.
He added that Ugwumba Uche Nwosu is a house hold name and is very conscious of his public image. He does things with consultations too because the personality of Ugwumba Uche Nwosu was not built by him alone.
Hon. Chikezie noted that Ugwumba Uche Nwosu has made it globally known that whoever emerges at the end of the guber traivail, that he is going to support the person which is what he is doing and wondered when he made such statement or move.
He advised political pundits to always be clear on a fact before holding on to it and making it to be a public consumable.
Ugwumba Uche Nwosu used the opportunity to call on all and sundry to support the Government of Imo State especially now that we have Pandemic ravaging the global community.
Let us defeat corona virus together and move the State forward and not talking about 2023 which is 1500 days away…he concluded