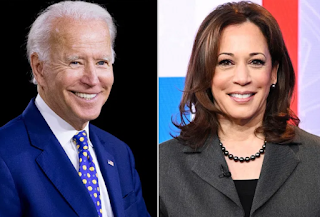 The president-elect was projected to have surpassed the 270 electoral vote-threshold after the AP called Pennsylvania in his favour.

US President Donald Trump did not immediately acknowledge the AP’s projection and his campaign has vowed to challenge the result, particularly in the states of Georgia, Pennsylvania, Arizona and Michigan.

The Republican leader’s campaign announced plans to seek a recount in Wisconsin and filed lawsuits to suspend the vote counts in several states.

Ballot counting continues in a number of key battleground states where the margins are razor thin.

Joe Biden will be the 46th president of the United States, after a victory in Pennsylvania puts the Scranton-born Democrat over 270

Kamala Harris will be the United States’ next vice president.

She will be the first woman to hold the office. She will also be the nation’s first Black and South Asian vice president. Harris, who has represented California in the Senate since 2017, is the daughter of Jamaican and Indian immigrants, and she grew up attending a Black Baptist church and a Hindu temple. She was the first Indian-American and second Black woman to serve as a senator.