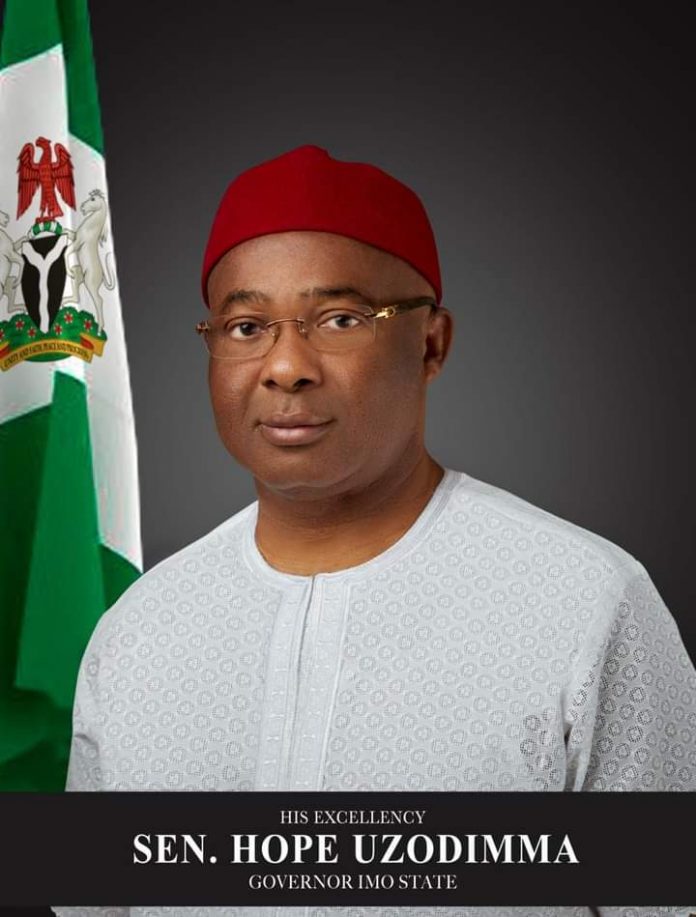 Imo State Governor, Sen Hope Uzodinma, has used this year\’s democracy day celebration to call for peace in the state.

In a state wide broadcast the Governor said \”Some of us may not appreciate the freedom embedded in democracy because we take it for granted. But when we realize that it is a potent weapon with which we determine those who preside over our affairs, we will appreciate the fact that democracy remains the best form of government the world over.\”

Continuing, the Governor said, that one major attribute of democracy that has for centuries made it the best form of government is that it provides the political space to resolve seemingly intractable social- political and ethnic issues, through robust dialogue without recourse to violence.

The Governor in the address further noted that Ndi Imo can achieve greater things through the same method because no issue, no matter how intractable it may appear, is ever too difficult to resolve through constructive engagement and dialogue.

\”This is what has sustained western democracies for centuries by availing them the space to run accountable governments which in turn guarantees development.

The Governor however stressed that evidence of this abounds in our clime, as Independence from colonialists was achieved through constructive engagement with our colonial masters, not through violence. The G34 gladiators that fought in the 1990s for the restoration of democracy during the military era achieved the goal through constructive engagement and dialogue.  This is the priceless lesson of history all over the ages.

He therefore used the celebration of democracy day to sue for peace in the state as he however noted that this year\’s Democracy Day is quite significant because it is coming at the heels of turbulent security challenges both in Imo state and the nation at large.

\”It is significant because, despite the crisis, democracy remains resilient. Its strength remains unshaken because it absorbs all manner of shock and yet stands the test of time.\”

\”The evidence of history is that the beauty of democracy lies in its ability to provide space for divergent views no matter how unpalatable. It provides us the opportunity to make our choices freely and peacefully. It enables us to ventilate our ideas constructively irrespective of who or what we are. This explains why those under democratic government must work hard to preserve and sustain it.\”

One of the tenets of democracy is tolerance, our ability to yield space for others to express their views without suppression. When we insist on having our way by brute force we seek to return to the ancient state of nature where might is right.  When we seek to force our ideas, no matter how beautiful we think they are, down the throats of others through the barrels of the gun, we are inviting anarchy which is an ill wind that blows no one any good. None of these situations can bring forth development which is the first fruit of democracy.

He said it\’s regrettable where we have today found ourselves in Imo state, which is a different kettle of fish. \”Some of our leaders are hard put to condemn the violent attacks rocking our state while others are busy spreading falsehood on social media to frighten and scare our people further.  This is most vicious and totally unbecoming of who we are.\”

He further stressed that from the inception of his administration, he has  done his best to ensure that the people of Imo state enjoy the dividends of democracy, as his first action was to open up the democratic space by ensuring that this Government is truly the government of the people for the people and not for a minority of family members.

\”Even in the APC, I have made it possible for the grassroots to regain control of the party.\”

Uzodinma further stated that as part of his goverment\’s efforts to reposition the state, the goverment has engaged in far-reaching development projects including roads, revamping of industrial concerns, youth empowerment and urban renewal.

\”It is significant to note here that it was at the peak of the celebration of our one year in office when some eminent Nigerians arrived here for the commissioning of some road projects that this issue of insecurity was escalated. This also came on the heels of the release of the government white paper on the judicial commission of inquiry on land use and related matters. I have often wondered whether those who triggered these satanic acts are averse to development.\”

The Governor is pleased that just few days ago, the police announced that the security situation in Imo state has a political undertone, which he said is a confirmation of what his goverment has already insisted in,  because those who vowed to make the state ungovernable for us have been unrelenting. But to the glory of God, they have been subdued.

\”It is however unfortunate that in the course of restoring normalcy, there has been collateral damage in terms of loss of lives and destruction of property. My heartfelt condolences go to the families of those who have lost the lives of their dear ones and those whose property has been destroyed.\”

\”With what has happened, investments are jeopardised and may soon take flight. Our youths are losing the few jobs they have. This should not be the legacy we should leave for our children. In the spirit of democracy, I am willing and available for any meaningful dialogue that would bring an end to violence in our dear state.\”

\”Let me reiterate here that we need peace for development. We should not be frittering our scarce resources in the management of security crises. You can bear me witness that the achievements we recorded in our first year in office would not have been possible under this kind of hostile and volatile atmosphere. We, therefore, need to move past this and take back our state.\”

He therefore assured Ndị Imo that he remains resolute and committed to serving the people to the best of his ability, and also pledged to judiciously apply the resources of the state for the benefit of the people.