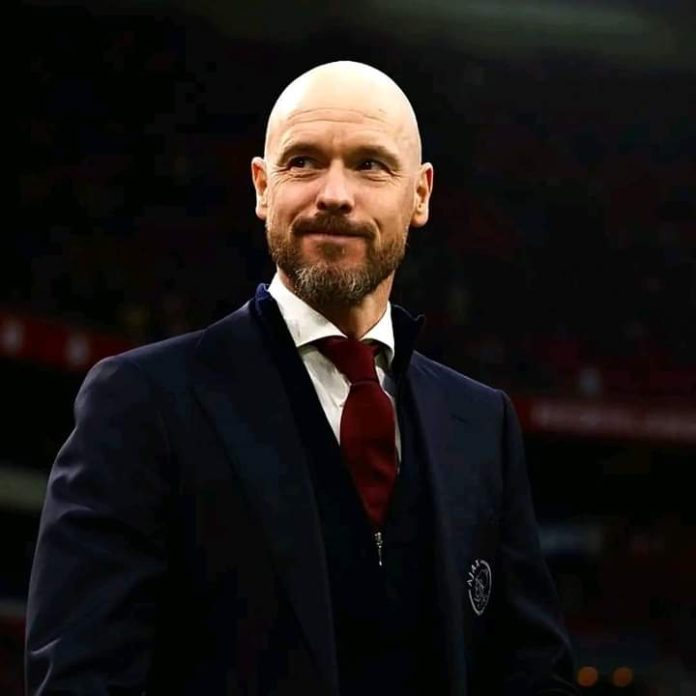 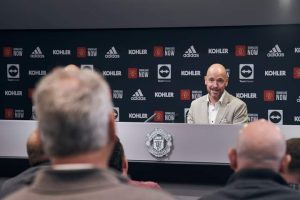 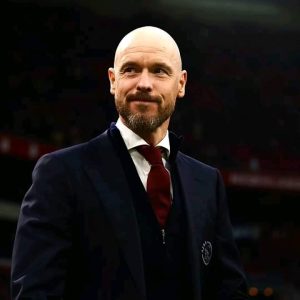 The Dutchman greeted the media warmly, shaking the hands of many reporters and issuing a friendly greeting to the rest of the room.

Ten Hag spoke openly about his plan for the Reds and his vision for the future. Here’s what the 52-year-old had to say…

You’ve been preparing for this job for a week or so now in England. You were at the Crystal Palace match yesterday. What are your first thoughts on what you are taking on, and what areas have you pinpointed that need improvement?

“I’ve made an analysis and I think we are in the lead of the process now, with this start. Before the season starts we have now a couple of weeks break. So I’ll make an analysis, I observe, and I set conclusions, of course. But I keep it now for myself. It’s [the Crystal Palace game] in the previous season now, and we look forward to going to the next season.”

Are you confident of a turnaround?

Ralf Rangnick said he was going to speak with you this week. Do you agree with him that up to 10 reinforcements are needed?

“I just said, I am still in the process of analysing to set conclusions. I am looking forward to working with these players. The season before, this squad was second in the league, so there is huge potential. I think if we improve, if we can work with them, I think we can get out more than what is now the result from this season.”

What have you assessed as the first steps you need to take?

There’s a lot of restructuring and there’s so much change. Are you excited by the challenge of having a blank canvas?

“That is on the club. They have to set conditions and I have to work with my squad to achieve success. That is what I am looking forward to and we have a strategy so we have a concept, and we will work on that.”

There is a lot to be done in terms of performance, but have you thought about changing the atmosphere?

It’s been nine years since United last won the Premier League title. Realistically how long will it take to be challenging again?

“I don’t think about that in this moment. What we are thinking about is that this is a project, which I know always takes time, but I know that in this club – and I have experience with other clubs like Ajax and Bayern Munich – we want to win. We want to win every game, so we go from game to game and then we will see.”

Did you think about coming here when you were offered the job? Is it a risk that you could be putting your reputation on the line?

“I don’t see it as a risk. I think this club has a great history and now let’s make a future. It is really exciting to do that with the people around who are in the club, and we also bring people in with the staff. We will analyse the squad and we will go on day-to-day. Work hard, one hundred per cent committed, and then I am sure we will get success.”

How much are you looking forward to the Premier League?

“It’s fantastic, but I already met big coaches, big teams from the Premier League [in European competition], so I know how to deal with that. But it is clear that the Premier League is the biggest league in the world, I think. I am really looking forward to battling with them.”

Have you spoken to people about what it’s like to be at this club?

“Of course, I have spoken with people to get an idea.”

Is it going to be a case of evolution or revolution at the club?

“I think we have to work and we have to set clear purposes, clear strategy and then you need people who have capabilities, and have the right attitude, a positive attitude. One hundred per cent committed and work hard and then we will achieve success.”

How will your team play?

“Maybe you have seen Ajax? And I like that. But it is always players who dictate the way of play. I have the ideal, I will line up my best team, and I will line up my players like that to get the best out of them. That they can go to the maximum, that they feel comfortable in the role and in the end it’s about getting the success together.”

Our interim manager for the past six months has been very vocal about changes that need to be made. Do you plan to sit down with Ralf?

“I think it’s part of my analysis. I analyse by myself, I observe, and I will speak with a lot of people. But finally, I will draw my own line.”

There are plans for Ralf’s consultancy. Do you advocate his role?

Did you speak to Louis van Gaal or Daley Blind about the club?

“I spoke with more people who have experience with this club. Experts, but finally I will draw my own line.”

Did you speak to van Gaal?

There is a belief that no-one will win a title while we are in this Klopp, Guardiola cycle of dominance. Do you agree with this?

“In this moment I admire them. I admire them both. They play, in this moment, really fantastic football, both Liverpool and Manchester City. But you will always see that an era can come to an end. I am looking forward to battling with them and I am sure all the other clubs in the Premier League will want to do that.”

Can that era come to an end before they decide to leave?

You spoke about our history earlier. Do you do a lot of research into the club and is that a reason why you came?

“No, the reason is, although it is a fantastic history, the reason is there is a high potential for the future. That’s why I am here.”

Will you speak with the players this week?

“No, I don’t speak with the players now. They need a break. They need the break to reflect but I am looking forward to starting. But I want to wait until the end of June for some players and the majority in the first week of July.”

What support do you need from the club?

“We had good meetings, good talks and I think we are on the same page. That is a good platform to start and I am sure, I have confidence in the project, that we have the good people around, the right strategy. And from that point about a good platform, then now we have to start work.”

Are there similarities between this job and the task you had when you first joined Ajax?

“Yes, there are similarities in both clubs. They both wear red! I think both clubs are used to having success and I think that is the biggest similarity.”

Could you give an example of what Steve McClaren and Mitchell van der Gaag will bring as assistants?

“They both know how to get success because they’ve both won titles, trophies in their careers, and that’s why they are here.”

Is recruitment going to be key?

Does Ronaldo fit into the project?

What do you feel he can bring next season?

Are you looking for more leadership from him as well? To lead the project?

“I will talk first with Ronaldo before I talk with you.”

What are your first impressions of Manchester?

“I have been in Manchester [before], but this is the first time I’ve been at Old Trafford and I’m impressed. It feels like my home already and I cannot wait until the first match and the stand is full. It will be an exciting experience.”

Are you looking forward to the crowds and the atmosphere?

“I have seen a lot in the past with big teams of Man United. They have a lot of generations that are really successful and there is a fantastic ambience always at Old Trafford, and I am really looking forward to getting that experience.”

And it was your favourite club as a boy, was it?

“It was. Seriously, for England. In every country, I have a favourite club. In England, Man United.”

Steve McClaren said you are good at analysing matches. What conclusions have you drawn from Palace?

“I observed it, I analysed it, but it was for me. I wasn’t the judge. I take this information into the new season.”

One ongoing discussion is who should be United’s captain. Do you feel Harry Maguire should remain as captain?

“I have to repeat: next season is a different season. I think he did a great job, he is a great player. He achieved already a lot. A really good contribution to Manchester United. So I am looking forward to working with him.”

How do you react to van Gaal’s comments about Manchester United being a commercial club?

Are you looking forward to working with [Donny] van de Beek again?

“Of course. We had a fantastic squad in our time at Ajax. I have a really good relationship with him and I am looking forward to meeting again on the pitch.”