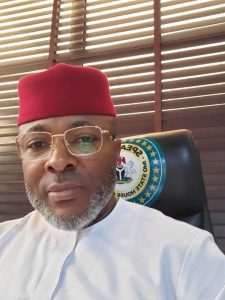 Few days ago, I opened the minds of the reading public on ” The Beauty Of Returning Our Legislators Back To Imo State House Of Assembly “. I equally quoted Luke Chapter 5 Verse 39 to show that Our Lord Jesus Christ supports the continuity in Office of Lawmakers who have spent years building capacity through attendance of workshops, seminars, learning on the job, passing through the fundamental knowledge of the legislative process, research etc. With the knowledge and experience gathered, these legislators become like Old Wine that tastes good. This is at variance to New legislators who instead of begining a New Assembly on a strong note, will rather expect Government to start all over again to fund and waste resources on capacity building, both on the “New legislators and their support staff“, thereby wasting precious time and resources that would have been used to further bring consolated development to the State. This is colossal loss of time, human and material resources because the huge sum of money which were to be expended on training the New legislators would be meaningless. This is because as these So-called New Legislators are about to settle down for the business of legislation, the end of their tenure stares them on the face. This makes their stay in the House meaningless and fruitless. Clearly, this is a huge loss to the state, both to Government and the Governed.

This piece is the second phase of the same topic, but rephrased IT IS IMO’S LOSS TO CHANGE LEGISLATORS EVERY NEW ASSEMBLY.

The legislature, as previously stated, is an important feature of Modern Democratic Practice. It is the Arm of Government responsible for making laws for good governance of the society. It also serves as a platform for resolving and reconciling differences in opinion about Policy Matters within the State.

For Lawmaking to be effective, the Lawmaker must come with Experience . This can only be possible if the lawmaker is an Old Wine. An Old Wine Legislator already has a developed knowledge base, which makes him to be competent enough to creditably and effectively discharge his role.

An experienced legislator effortlessly repeats his campaign trips, this time, not to seek for votes, but to give feedback as well as to assess their developmental, social and economic needs and how to integrate them with Government public policy programmes. Furthermore, the experienced legislator already has knowledge of the various competing interests in his constituency, competing needs of his constituents and through dialogue, prioritize such with a view to pursuing their accomplishment as agreed to by the majority of the Stakeholders.

The Experienced legislator knows the workings and operations of Government and other environmental factors etc. I say this because it is only him, the experienced legislator, that understands the workings and operations of the Legislature, as well as the Executive Arm Of Government, to help identify Projects and Development Programmes that will benefit his constituents.

While it Is possible for an experienced, well articulated and skill legislator to get their constituents’ Projects passed into law or at least, have it approved, lack of experience and knowledge of the workings of Government and in particular, the Executive Arm, may frustrate their execution and Implementation. On the other hand, an inexperienced legislator and who is not conversant with the workings of Government would not know how to lobby the Executive Arm to ensure the Implementation or approval of constituents’ programmes and projects.

Ranking And New Legislator : This has to do with Experience and Knowledge of legislation. A Ranking Member is One who has won reelection, and is therefore better placed to occupy sensitive and lucrative Principal Positions. A New Member rarely and hardly occupies such positions. Juicy Committee Chairmanships are occupied by Ranking lawmakers, while New lawmakers would be lost in the “Sea of Galilee“.
This is because they do not understand what the legislature, legislative duties and Parliamentary businesses are all about. So Ranking in effect means a legislator who has come with experience to execute and Implement the policies and programmes of Government and the Governed, through sound legislative responsibility.

Legislative experience, having undergone many years of training and attendance of workshops and seminars.

Has knowledge of the various competing needs of His Constituents

Has the knowledge of the various competing needs of His Constituency.

Knows the workings and operations of Government and other environmental factors.

Has Capacity to effortlessly continue to have Projects Approved and sited in Obowo State Constituency, for the benefit of His Constituents.

His Ranking Status has has earned him not just the Speaker Of Imo State House Of Assembly, But has also earned him the Chairman of All Committees.

The Reestablishment of Development Centres across the State by His Excellency Governor Hope Uzodinma in all the 27 LGAs was to further bring Development to the grassroots. While other local governments have one Development Centre each, Obowo LGA has Two Development Centres, due to the Political correctness and Position of Rt Honourable Kennedy Ibeh as Speaker Of IMHA.

His very rich experience has further robbed off on Obowo People, Okigwe Youths and Ndimo in general, with his elevation to the position of Speaker Of IMHA, which has led to the provision of employment opportunities.

And so on and so forth.

Therefore, using Obowo State Constituency to ventilate my points, it is very clear that Imo State and our respective State Constituencies would lose if our legislators are changed at will in every New Assembly.

Finally, His Excellency Senator Hope Uzodinma, as an experienced legislator is working Hand in Hand with our State Lawmakers, through perfect Synergistic Collaboration in bringing Consolated Development to the State. Efforts should not be encouraged to distort this arrangement, by attempting to have New wine legislators who would definitely be LOST in the SEA OF GALILEE .

Let us therefore Support our Old Wine legislators to return back and continue the good work, which will definitely taste better. It is not Second, Third, Fourth or Fifth term. It is Old Wine, and will continue to taste better. Our Lord Jesus Christ supports it (Luke Chapter 5 Verse 39).

I Rest My Pen.