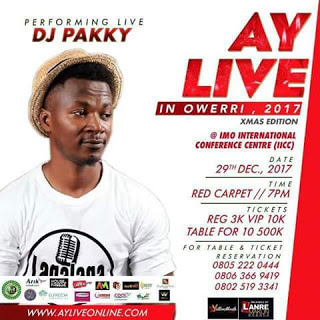 AY refused to pay me and every other Imo state based artiste who performed at AY Live Owerri in December 2017 and called us all upcoming. That is how DJ Paky who was the DJ for AY Live Owerri were treated after sacrifices made towards the success of the show last year.

DJ Paky who played at AY Live Owerri comedy show on 29th December, 2017 has called out AY, AY\’s brother (Lanre Markun) and Yellowmouth Concept for not paying him and every other Imo state based artiste that performed at the event that attracted a very big crowd.
The DJ disclosed to us that he was contacted by Yellowmouth (a comedian and event manager from Owerri and partner for AY Live Owerri) who assured him that the deal with AY will work out   fine. He (Paky) then put in his best in promoting the event to his own fans, assisted in circulation of flyers, and most importantly was the main DJ of the event that took place at the International Convention Center Owerri but as at today, January 11th 2018, neither AY nor Yellowmouth Concept has reached out to him to pay him for his services.
DJ Paky further revealed that AY\’s brother added insult to injury when he (Paky) called to complain to him. AY\’s brother (Lanre Markun) who packaged the event insulted him over the phone, telling him that he does not know of any DJ Paky and that AY can\’t pay any money to any Imo state based artiste because all of them are upcoming artistes and those who performed at AY Live in Owerri were did a favor by getting a platform like that to perform on!

This is the message Lanre Markun sent to DJ Paky when Paky enquired for his payment; as received from DJ Paky:

Lanre:
Guy I did not tell Yellow mouth I need dj. Becide since we start our show in 207 we never pay dj once dey always call to support and also use it to get more relevant so pls. Not even Jimmy jat or exclusive will ask ay for money not talk of dj dat dey beg to put him to help him

GistGate  contacted one of the key organizers of the Owerri AY Live and the respondent who pleaded anonymity strongly agreed with the point that AY does not pay any upcoming artiste wherever he takes his show, whether it is Port Harcourt or Lagos or Abuja. The respondent said lots of artistes need a platform as big as AY\’s to perform and AY does not pay small names in the industry for performing at his shows.
On the case of not paying DJ Paky, the insider said Paky was done an honor because lots of other DJs from outside​ Owerri wanted to come perform for free but the organizers just thought it would be uncool to leave all the DJs in Owerri and go outside Imo to get a DJ. The insider advised Owerri artistes and performers to make research and understand the entertainment business and not make a fool of themselves