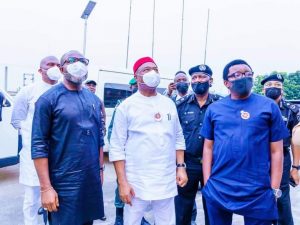 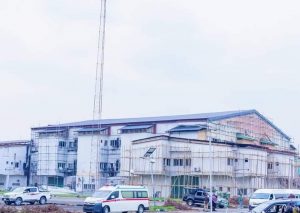 The governor whose administration is noted for solid infrastructure development, has awarded the rehabilitation of the dilapitated massive Imo State House of Assembly Complex, to a world renowned construction firm-DiResta construction company.

The governor who recently went round the complex in the company of the Speaker, Imo State House of Assembly, Rt. Hon. Barr. Kennedy Chidozie Ibeh, iterated his determination to offer the best service to Imo people in all sector of the state economy.

The contract was awarded to the reputable construction giant owing to His Excellency’s resolve to deliver quality and long lasting infrastructure in every project he embarks.

Governor Hope Uzodinma, who himself a renowned law maker of national standing, has promised unflinching support to Imo State House of Assembly in line with the 3-Rs mantra of his administration.

The Rt Hon. Speaker, while accompanying the governor and his entourage round the complex, said that he was not surprised at the quality of the construction firm the governor engaged, because according to him, quality and excellence has been the hallmark of the governor in all his projects.

He thanked the governor for providing the needed support to IMHA and for always working hard to provide Imo people unparalleled leadership direction.

The Rt Hon Speaker said that the completion of the complex will not only provide conducive environment for legislative activities but will also improve workers efficiency.