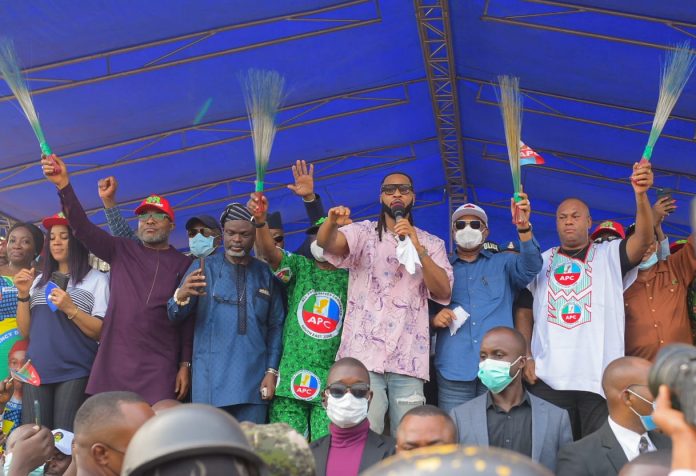 The aspiration of the APC candidate for the forthcoming Ngor Okpala state constituency bye election, Okenze Blyden Amajirionwu,, received a major boost on Thursday as the entire APC in Imo State emptied at Community School Ntu, venue of the political rally.

The rally, which was led by the governor, His Excellency,, Sen. Hope Uzodinmma and accompanied by his deputy, Professor Placid Njoku,. the Speaker Imo State House of Assembly , Rt. Hon. Kennedy Ibeh, the APC state party chairman, Dr. MacDonald Ebere and host of others, was to show solidarity and support to the party’s flag bearer at the election.

While speaking at the event, the Governor Sen Hope Uzodinmma, said that the case of Ngor- Okpala in the election is like the biblical shephered who left the 99 and went affer one sheep that was lost.

He explained that since 1999 there is no evidence that Ngor-Okpala has enjoyed dividend of democracy.

The governor further explained that though Ngor-Okpala has oil wells, but ware ceded to River State since 1999 without anybody challenging it until he came on board. He expressed optimism that the state will get judgement in the case which is at the Supreme Court at the moment. .

He assured of his determination to use the resources of the land to develop the area and turn it into an industrial hub.

He promised that a vote for Blyden Amajirionwu, the APC candidate, is a vote for total transformation of Ngor- Okpala.

While addressing the mammoth crowd, the Speaker, Imo State House of Assembly (IMHA,) Rt. Hon. Barr Kennedy Chigozie Ibeh, who led other house members to the occasion, said that what they have come to do is to thank God for the deliverance that Ngor Okpala will get by voting in Okenze Blyden Amajirionwu of APC during the bye-election.

He reminded the people of Ngor- Okpala that they had no voice in IMHA for two years because PDP imposed a dumb as a member who eventually absconded.

The Speaker told them that the result of the bye election, which will hold on Saturday, is already in their hands, noting that they have a choice to vote Okenze Blyden and recover all they have lost.
According to him, it will be unthinkable to vote for opposition as their house member in a House that has over 20 members in the ruling party.

According to him, the Governor Hope has come to recover and he appealed to them to vote for APC massively so that they can recover all they have lost.

Also, the State Chairman of the party, Dr. MacDonald Ebere, while calling on the people to vote APC, urged party faithful to be resolute and shun all forms of intimidations during the election .

The side attraction was the burning of the green cap by former members of Ihedioha Youth Vanguard, Ngor-Okpala Chapter . The youths claimed to have left PDP because their parents have decided to join the 3R government. 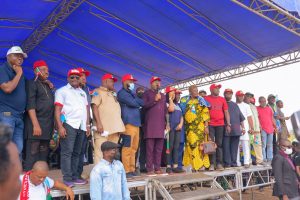 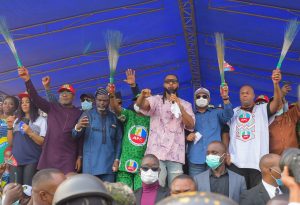 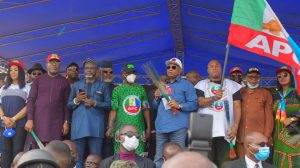 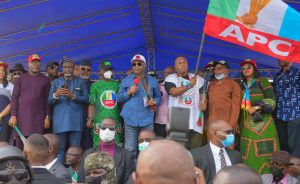 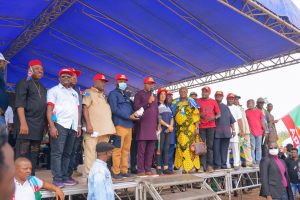